Arriving in Tucson last month, my car passed a sea of red-shirted teachers protesting in solidarity with over 50,000 educators who marched out of their classrooms to the Phoenix statehouse to demand more funding for public schools. Teachers in Arizona and Colorado joined ranks with colleagues from states like West Virginia, Oklahoma and Kentucky – with more to come. 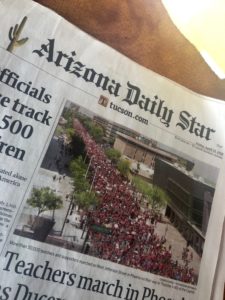 This phalanx is seeing “Red for Ed’ucation.”  Rightly so; and it is no small irony that the people’s rebellion over education has been erupting in so-called ‘Red States’ whose elected officials have rejected federal and state funding strategies that might have averted such devastating consequences.  According to the Washington Post, “(t)wenty-nine states now spend less per student on K-12 education than a decade ago… and a number of these states have also cut income taxes, including Oklahoma and Arizona.”

To our everlasting national shame, the United States is eating its own seed corn.

Because politicians have failed to fund comprehensive, robust and equitable national Pre K-12 education for decades, our country is fast becoming an education wasteland –  in our cities, rural areas and rustbelts.  Although high-powered pockets of innovation – Silicon Valley and its silica offspring in places like Massachusetts and Southern California – create the prideful delusion that the U.S. is producing enough skilled brainpower in science, technology, engineering and mathematics (STEM) to lead our nation into a bright economic future, the stark reality behind these shiny objects is that a lot of the STEM talent is imported.  In addition, current  immigration policies are having a chilling effect on foreign students attending U.S. universities.

Without cultivating homegrown STEM talent, we are in danger of not only witnessing the end of the American Century, but further economic and social decline over the next.

Writes CNN commentator Linda Darling-Hammond, “a nation that under-educates its children in the 21st century cannot long survive as a world power. Prisons — which now absorb more of our tax resources than public higher education did in the 1980s — are filled with high school dropouts and those with low levels of literacy. We pay three times more for each prisoner than we invest in each child’s education annually. With an aging population and only three workers for every person on Social Security, the United States especially needs all young people to be well-educated enough to gain good work in the complex and rapidly changing economy they are entering.”

The pattern of benign neglect of our education system that led us to this precipice began some time ago.  The return of federal dollars to the states to spend in the 70s and 80s signaled the dismantling of a national education strategy. Back then, the US was driven by a Cold War anxiety that our nation’s children were ill-equipped to become the next generation of scientists and engineers to follow those who emerged on the scene after World II.  For over fifty years, we rested on our laurels as ‘winners’ of World War II while Europe recovered, and the sleeping giant China was under the regressive policies of Chairman Mao.

During this period, and most notably after the Great Recession of  2007 when states made deep cuts to their education budgets, the Nation stepped away from its promise to educate critically thinking, science-minded young people. There is plenty of blame to go around; both political parties have made weak-kneed attempts at raising the bar with programs like No Child Left Behind and Race to the Top.  Our national and state leaders had already given away the store by failing to view education of its youth as a strategic national security investment to meet the challenges of the Fourth Industrial Revolution.

Under-educating our children is directly tied to failing to place a monetary value on teaching, teacher training and capital investment in every classroom in the land. Today, our greatest national security crisis is an acute shortage of teachers of math, science and computer science, bilingual education and world languages — all essential areas of learning for a nation that would like to compete in the globalized knowledge economy.

While other developed nations are making education investments in order to have citizens prepared with critical 21st century skills and knowledge needed to drive healthy economies and compete in the global marketplace, the local, state and federal governments in the U.S. chose to cut education dollars.  But it’s not just what we spend, it’s how we spend it. Says Andreas Schleicher, who heads the OECD directorate, “If you simply cut spending with your existing spending choices, you will end with less for less,” citing that some school districts have cut the number of school days to four from five each week. “In the U.S., teachers have less time for professional development, teacher collaboration, lesson preparation, working with students individually.”

Darling-Hammond thinks that solving our education crisis requires the federal government to launch a national initiative like the War on Poverty that redistributes education dollars needed to increase and equalize school funding. And while there are mighty attempts by organizations like the National STEM Funders Network to create equitable paradigms for learning, such as the programs we champion at Broadcom such the Broadcom MASTERS and the STEM Ecosystem Initiative, these programs and others like them can only scratch the surface of a problem that requires an infusion of federal vision and cash.

But as I lament in this article, failing to summon the national will to reinvest our abundant resources in our youth is to act at our peril – and to our everlasting detriment. Watching those protesters, I despaired as I listened to a science teacher on the local Tucson talk show who said his second full time job as a server at a fast food local restaurant earns him the meager means to do the thing he loves: teach.