Project:
Spare the Environment, Spoiler the Car: The Effect of Rear Spoilers on Drag and Lift

Grand prize winner Raymond Gilmartin, a self-described car enthusiast, decided to find out how a rear spoiler affects drag and lift in SUVs. After building two spoilers for a model SUV and testing in a six-foot wind tunnel, he concluded that a level spoiler would increase drag compared to a car without a spoiler, but would not affect lift. Raymond found that reducing drag can improve gas mileage, ultimately decreasing carbon emissions and helping to slow climate change.

He was selected for the Samueli Foundation Prize based on his mastery of STEM. Raymond has exemplified how research and innovation are dependent on the integration of these disciplines as well as the impact they collectively have on our every-day lives. 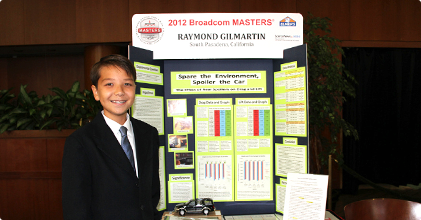 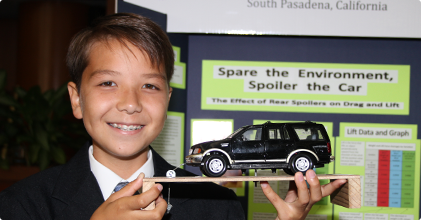 Marconi/Samueli Award for Innovation winner Jessika Baral was inspired to study vision after noticing that her friends often use handheld electronic devices for long periods of time – a habit that can result in eye muscle fatigue. She decided to put her engineering skills to use creating a device to strengthen tired eye muscles and improve peripheral vision using LED lights. Through her research, she found that regular exercise with the device significantly improved both peripheral vision and peripheral reading range in children and adults.

Jessika was selected because she demonstrates both vision and promise as an innovator, and in the spirit of radio inventor Guglielmo Marconi, has shown aptitude and skill in applied electrical engineering concepts in her science project and in STEM challenges throughout the week. 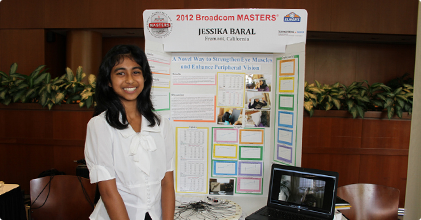 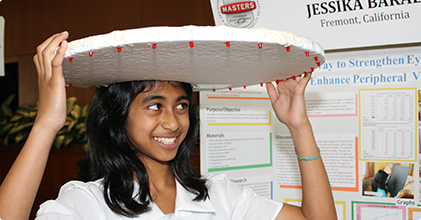 Each of these finalists (first- and second-place award winners) were selected for demonstrated skills and promise in each of the disciplines represented by STEM. First-place winners are awarded $3,500 and second-place winners receive $2,500, in each case to support the finalist’s choice of STEM summer camp experiences offered around the country. Each STEM winner also wins an iPad®.

First place: Daniel Lu of Carlisle, Mass., for his project on the perception of volume.

Second place: Anirudh Jain of Portland, Ore., for his project on silver nanoparticles and pollution.

First place: Manasa (Hari) Bhimaraju, of Cupertino, Calif., for her project on a low-cost animated teaching tool for the study of elements in the periodic table with an interface for the visually impaired.

Second place: Anusha Zaman, of Baton Rouge, La., for her project on the potential health effects of betel nut use.

First place: Chase Lewis of Chapel Hill, N.C., for his project on gun powders and nitrocellulose.

Second place: Carolyn Jons of Eden Prairie, Minn., for her project on mold growth on blueberries.

Second place: Maya Patel of The Woodlands, Texas, for her project on predicting the spread of wildfires.

Cassie Drury of Louisville, Ky., (pictured, left) and Mabel Wheeler of Orem, Utah, (pictured, right) won a trip to the Intel International Science and Engineering Fair in May 2013 as the United States Delegates to Broadcom MASTERS International, in recognition of their projects on cell signaling in wound healing in worms, and the impact of sunscreen on the degradation of polymers, respectively.

The Broadcom MASTERS Team Award was awarded to the black team for demonstrating their ability to work together as a team, solve problems through shared decision making, communication and scientific and engineering collaboration. Each of the five team members received an iPod nano and wristband. (Pictured left to right: Ethan Messier, Will Monts, Maura Clare Oei, Cassie Drury and Raymond Gilmartin).

Broadcom Foundation and Society for Science & the Public present the 30 middle school finalists in the 2012 Broadcom MASTERS competition.These young all-stars won an all-expense paid, week-long trip to Washington, D.C,. culminating with the awards ceremony on October 2, 2012.