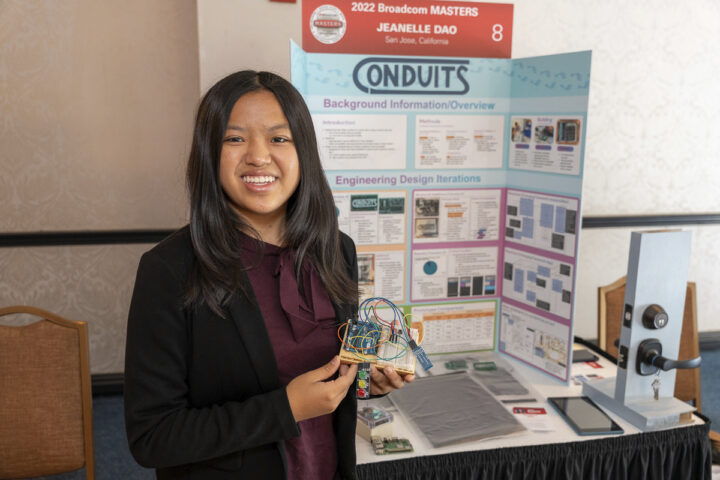 Jeanelle Dao was recognized for the 2022 Broadcom Coding with Commitment award while in 7th grade at Stratford Middle School in San Jose.

Sponsored by Broadcom Foundation, Broadcom Coding with Commitment recognizes students in grades 5-8 who combine STEAM learning with coding to solve a community problem they care about that aligns with the 17 United Nations Sustainable Development Goals.

Jeanelle also won the $10,000 Lemelson Award for Invention at the Broadcom MASTERS, the nation’s premier science and engineering competition for middle school students.  Awarded by The Lemelson Foundation to a young inventor who creates a promising solution to a real-world problem, Jeanelle invented a foot-controlled welcome mat that wirelessly unlocks a door when the user enters the correct code.  The device could help people with arthritis and other hand problems become more self-sufficient. 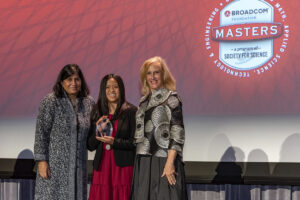 “Broadcom MASTERS was an amazing experience – I met so many people, all of whom have similar passions to me, yet diverse at the same time,” said Jeanelle. “I learned that I’m capable of more than I thought possible – that I should shoot for the stars because I can reach them. I wish everyone could gain that same confidence, because if no one was afraid of their boundaries, who knows what some people would be capable of.”

Jeanelle’s grandfather had severe arthritis, and she grew up seeing him struggle to open doors, turn on faucets, and numerous tasks that required his hands. In her household, it was an unspoken rule to open doors for him.

This year, Jeanelle decided to compete in science fair and thought back to her grandpa’s struggles.  She researched online to see if there were products to help people open doors without any luck.

“Knowing there were millions of others like my grandpa who struggled with these tasks was enough to motivate me to find my own solution to this problem,” Jeanelle said.  “Now, I have a fully assembled product to help people with arthritis and carpal tunnel to open doors – just one way to make life easier for the disabled.” 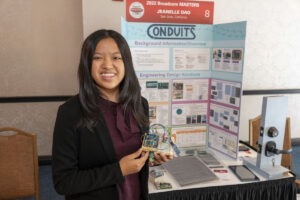 The CSEF is the final science fair of the academic year for students throughout the State of California in grades 6 – 12, serving California’s future scientists and engineers since 1952.

In the future, Jeanelle hopes to make an app for users to customize the device’s password, start exploring the idea of patenting, and begin designing the product to be market-ready with experts and potential users.

“I would like to help as many people with hand disabilities as I can and make a big impact on improving their lives,” Jeanelle said.

Raspberry Pi Foundation has free resources to help anyone learn how to code. Visit the Projects site to get started.