At 13 years old, Eleanor Sigrest from Woodbridge, Virginia, won the Samueli Prize at the 2016 Broadcom MASTERS for her work in a rigorous team competition and for her amazing engineering design for rocket nozzles, propelled (pardon the pun!) by her love for space and dream of piloting an expedition to Mars. 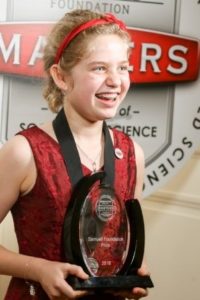 “As long as I can remember, it has been my passion to travel in space,” says Sigrest. “My family has helped me follow my dream, with my mom waking me up to watch a lunar eclipse to my parents allowing me to skip school in order to watch the Space Shuttle “Discovery” be carried on a modified Boeing 747 to the Smithsonian Udvar-Hazy Space Flight Center.”

Sigrest started focusing on cold gas rockets after the SpaceX’s Falcon 9 rocket explosion. She built equipment to force pressurized gas through different nozzles made with a 3-D printer. After collecting data on force, pressure and temperature, she concluded a 20-degree half-angle was the best compromise between a nozzle’s length and its thrust. 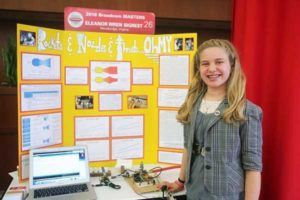 “Eleanor is the epitome of a young woman scientist and engineer. She combines insatiable curiosity with courage: two traits that are essential for a leader in these fields. Her leadership skills are unparalleled. She not only wowed the Judges, she inspired her team to do amazing work together throughout the weeklong competition,” said Paula Golden, President of Broadcom Foundation. “It is a thrill to watch her advance as she grows older and even more confident of her abilities. She makes us proud!” 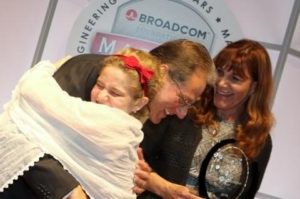 “The best thing about the Broadcom MASTERS was being surrounded by a group of like-minded students my age. That’s hard to find as it is, and it’s even harder to find at that young age,” Sigrest said. “I was so blessed to meet all those wonderful people and feel encouraged and supported at such an important time in my life.”

“During the Raspberry Pi Challenge, I learned that sometimes the simplest solutions are the best. I also learned it’s important to try everyone’s ideas because you never know which one might work the best,” says Sigrest. “Sometimes it’s a compromise of different ideas, or a compromise between complicated and simple. The most important thing is to consider them all.”

Eleanor has become an inspiring advocate for STEM education, saying “I was hooked after I supported the Society for Science & the Public during a day-long workshop at the 2017 World Science Festival in New York where we introduced thousands of families to the awesomeness of rockets.” 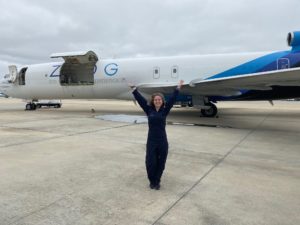 Focusing on introducing middle school girls to STEM, Sigrest supports STEM events and online education by leading workshops and giving keynote addresses to encourage young women to follow their dreams. She has designed a hands-on workshop that introduces girls to rocketry though water bottle rockets and instructs them on constructing and testing rockets.

Watch Eleanor on the TODAY Show in a “Girls Changing the World” segment designed to encourage girls to pursue passions in non-traditional fields here.

After winning Broadcom MASTERS, NASA Goddard Space Flight Center gave Eleanor a VIP tour where she engaged and connected with scientists who peer-reviewed her Zero-G parabolic flight Research Proposal Package. Eleanor submitted a proposal to test her new research on “slosh” or unwanted movement of fluid in a tank, and was successful in raising $20,000 for Zero-G flight service fees. 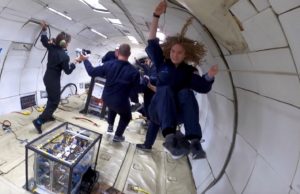 Eleanor’s first parabolic flight was an experiment for her novel microgravity slosh mitigation technique. Her test apparatus features an accelerometer to precisely determine the moment of zero-gravity, 13 Raspberry Pi’s and 12 PiCameras to capture the slosh movement with GoPros acting as a redundant video collection system.

“The flight was AMAZING! Luckily, I managed to last the entire flight without getting sick,” said Sigrest. “Conducting an experiment in a space-like environment gave me a sneak peek at how my job as an astronaut will be… and I LOVED it. Feeling weightless and the extra challenges it brings is fascinating and honestly, extremely fun.” 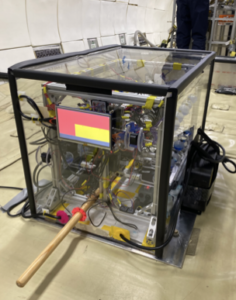 With promising data, Eleanor has submitted a $100,000 proposal for additional Zero-G parabolic flights while updating her workshop to lead young women through the lifecycle of an experiment and sharing her experiences with proposal development and the space industry.

She is also raising $10,000 for additional payload services for a suborbital flight on Blue Origin’s New Shepard. Read more in her press release here.

“I intend to be a Computer Science Specialist on the first mission to Mars, and Broadcom MASTERS was one of the first steps toward reaching my life goal,” says Sigrest.