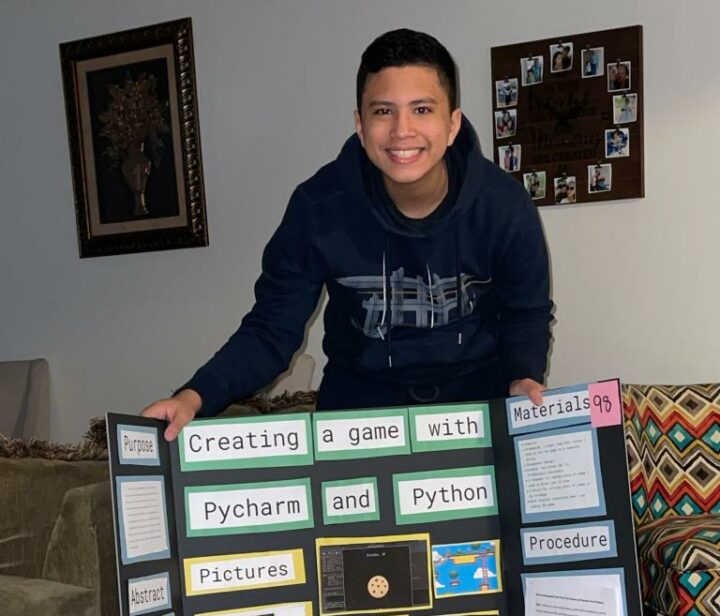 Project: Creating a Game with Pycharm and Python

How do games work?  That was the question that Jayden Quezada, middle school student from Berks County, Pennsylvania, set to uncover while he played his all-time favorite video game, Minecraft.

“Minecraft inspired me to make this project because it taught all the cool things a person can do with coding, time, and diligence,” Jayden said.

He created his own game and won the 2022 Broadcom Coding with Commitment award at the RBSEF fair in Pennsylvania.  Jayden won a Raspberry Pi, a low-cost, but high performing mini-computer that helps students of any age learn coding.

Sponsored by Broadcom Foundation, Broadcom Coding with Commitment recognizes young people who use coding with science to solve problems in their community with a focus on the 17 United Nations Sustainable Development Goals.  “This was the first game I ever made, and I hope to make it better in the future,” Jayden said.

He became interested in coding from his uncle who uses coding in his business.  His uncle taught him the basics, and he leaned how games work by coding functions in his own game.

“What I like best about coding is that anything you visualize, it can be put on a screen just by coding the right things to be able to showcase to people what you have made,” Jayden said.

Visit Projects | Computer coding for kids and teens | Raspberry Pi to get started!